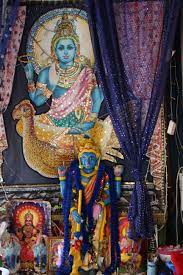 The Bhakti Movements of the medeival period in North India brought with them many new dimensions of Indian Arts and Culture. The new surge of devotion of the god Krishna, especially in the Braj area, was accompanied by uniques developments in Indian music, both vocal and instrumental. Indeed, what became known in suceeding centuries as Hindustani classical music had its roots in the music of the temples of Mathura and Vrindavan, religious sancturies founded by Vaisnava saintsand their disciples.

The Journal of Vaishnava Studies is an official academic publication of the Institute for Vaishnava Studies. It was founded in 1992, by Steven J. Rosen, who has been its Editor-In-Chief up to the present. It is the longest-running academic journal on Hindu studies in the world, with its thirty years of unbroken publications. In its three decades of serving the academic community, it has published nearly 700 articles (a small percentage of which are book reviews) contributed by scholars from the Americas, Europe, Asia, and Australia. Hundreds of scholars from around the world reference articles published by the Journal in their works published by top academic publishing houses, such as Oxford, Chicago, Columbia, Princeton, California, Yale, Harvard, etc.

The Journal of Vaishnava Studies is a refereed, biannual publication, each issue of which has all of its articles focused upon an aspect of the declared theme in the call-for-articles announcement made prior to its submission deadline. While all entries are reviewed by at least two (anonymous) qualified scholars in the field prior to publication, more importantly, they are also reviewed as to how they contribute to the theme of the issue. Throughout its nearly three-decade existence, the Journal has produced close to seventy thematic issues focusing on a great variety of subjects within Hindu-Vaishnavism, providing in each issue, in effect, original and unprecedented treatment of the subject. For further information, please see submission guidelines and editorial requirements.